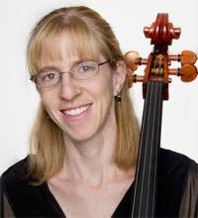 An active performer on cello, baroque cello, and viola da gamba, Lara Turner enjoys a varied career performing music ranging from contemporary to baroque. Lara has held the position of Principal Cello with the South Bend Symphony since 2004. She has been a featured soloist performing with the symphony: Milhaud’s Concerto No. 1 (2007), Tchaikovsky’s Variations on a Rococo Theme (2013), Saint-Saens’ Concerto No. 1 (2015) and Beethoven’s Triple Concerto (2017). Lara is a member of Claricello, a clarinet and cello duo co-founded with her husband Jason Gresl. Claricello, focusing primarily on contemporary classical music written for this unusual combination, is regularly featured at the Loon Lake Live! Chamber Music Festival in Upstate New York and has performed in Canada, Italy, Holland, and across the United States. Their performance of “Dust” by Belinda Reynolds can be heard on her CD entitled Cover. Equally at home in the early music genre, Lara has been the principal cellist of the Baroque Chamber Orchestra of Colorado since 2005. She can be heard as a member of this ensemble on their CDs Cornucopia, Forte e Dolce and Corelli’s Circle. She performs regularly with other early music groups including Louisville’s Bourbon Baroque and the Indianapolis Baroque Orchestra, and has been a featured soloist on viola da gamba in Bach’s St. Matthew Passion at the Baldwin-Wallace Bach Festival. A dedicated teacher, Lara maintains a private cello studio and serves as adjunct cello faculty at Saint Mary’s College, Andrews University, and Bethel University. Lara earned a Bachelor of Music degree from Oberlin Conservatory studying with Andor Toth, Jr. and Catharina Meints, and a Master of Music degree from San Francisco Conservatory studying with Bonnie Hampton.